EVERYTHING YOU NEED TO KNOW

When the inspiration strikes for a warm, hearty stew or a thick rib eye thrown on the grill until it’s perfectly pink in the middle, wouldn’t it be nice to make a trip to the freezer instead of the grocery store? That’s one of the many benefits of buying beef in bulk. It can seem like an intimidating process, but it doesn’t have to be. All you need is enough freezer space, a chunk of cash and a little knowledge about how an animal becomes a steak.

Buying a side or a quarter of an animal makes sense on many levels:

• It’s cost-effective. Instead of spending upwards of $30 per pound for beef tenderloin, for example, you might end up paying as little as $6 a pound when you buy a side of beef.
• You support small local businesses. When you buy from a local rancher, you’re dealing with someone who has chosen not to sell all his/her animals into the commodity beef system. In many cases, you won’t be eating meat from animals that were treated with hormones and subtherapeutic antibiotics, shipped to feedlots and fed corn, soy or assorted other appetite-destroying feeds. Instead, you’ll be enjoying meat from animals raised on pasture, fed a healthy diet and allowed to live relatively normal animal lives.
• You’ll have a freezer full of variety, which makes for more fun and creativity in the kitchen. 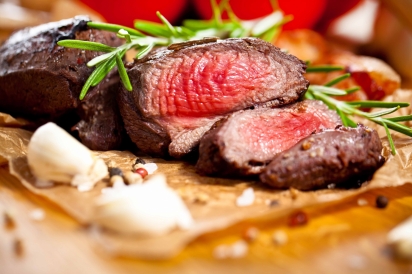 Before you head out in search of bulk beef, here are a few concepts you’ll need to understand.

Most processors sell bulk meat based on weight, but not all weights are the same. Live weight is how much the animal weighs before slaughter. If you buy based on live weight, you won’t pay as much per pound, but you won’t get the full weight in packaged meat.

Hanging weight is a more common way of measuring and charging for meat. This is the weight of the carcass after removal of the head, skin, hooves, viscera and blood. It’s usually around 60% of the live weight. But you don’t get the full weight in meat when you buy by hanging weight, either.

The take-home weight is the actual weight of the meat after cutting. It’s around 60% of the hanging weight, depending on the amount of fat in the carcass, whether or not the meat is bone-in and whether or not it’s been dry-aged.

And speaking of aging, you’ll hear the terms “dry aging” and “wet aging” commonly used when you’re buying in bulk. With dry aging, the butcher hangs the carcass in a temperature-controlled room for anywhere from a week to several months, allowing the moisture to evaporate from the meat and the tenderizing enzymes and microbes to go to work. The longer the meat dry ages, the less yield you have, but the more tender and packed with flavor it becomes. Longer aging also increases the cost.

Wet aging means the meat was vacuum packed after cutting and then held at a constant temperature for several days to several weeks. Because the meat is sitting in its own juices, it doesn’t concentrate the flavor like dry aging, but wet aging does help tenderize the meat.

How Much Will It Cost?

Let’s use the example of a 1,200-pound steer, which will yield between 400 and 500 pounds of meat. If you buy based on live weight, the cost calculation would look like this:

In addition to the price per pound, you may have to pay a kill fee and a cut and wrap fee, which could add as much as another $500 to the cost, bringing the total price per pound to around $6, still reasonable when you compare it to buying pasture-raised or grassfed meat at the grocery store.

Keep in mind these numbers are estimates. The actual weight of your beef will depend on the animal’s weight at slaughter, which can vary by breed, whether the animal is a steer or heifer (male or female) and how lean the animal is, as well as on how the processing and cutting are done. It also depends on the going market rate for beef. You’ll pay more per pound when you buy based on hanging weight or take-home weight, but the end result in dollars will be similar.

Greg Bernett, president of Arizona Grass-Raised Beef Company, which sells Arizona beef, further simplifies the process for his customers by offering a standard-weight package for wholes, sides and quarters. “We think it’s really huge for consumers to not have to worry about hanging weights and figuring out cuts. We take the bones out of everything, so when you buy a quarter from us, you get 75 pounds of meat you can chew. 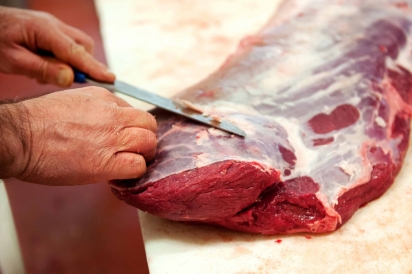 What Cuts Will I Get?

Some producers allow you to pick your cuts; others offer a standard package. A standard quarter will include cuts from both quarters of the side, as well as plenty of ground beef, although you may also be able to specify whether you want the forequarter or the hindquarter.

The major muscle groups are referred to as primals, and the tenderness depends on the amount of work they get during the lifetime of the animal. The most tender cuts are near the top and middle, while the lower and farther to the front and back, the less tender they become. (See the Beef Cuts Chart.)

Some processors will allow you to have the offal—the organ meats like liver, kidney, tongue and heart that aren’t so popular—and some will let you have the oxtail and bones. If you want them, be sure to ask, because you probably won’t get them automatically.

And How Do I Store It All?

The meat will come flash frozen and packaged in Cryovac or butcher paper. One cubic foot of freezer space will hold approximately 35—40 pounds of packaged meat, so a quarter or even a side will fit in a small chest or upright freezer. If you’re going to buy a freezer, keep in mind that you’ll probably use it for more than meat, so you don’t want to skimp on the size.

To make sure the freezer stays organized, use small plastic or wire bins to keep similar cuts together. You don’t want to waste time digging through stacks of steaks and roasts when you’re looking for a one-pound package of ground beef. Another handy tip is to keep a list of the inventory on a magnetic wipeoff board on the side of the freezer. Every time you use a package, mark it off. That way you’ll always know what you have on hand without having to open the freezer. It will also help you see what kind of cuts you use most often, and which are less popular in your kitchen, so when you buy next year you’ll know which cuts to order or avoid.

The official word on keeping frozen meat is that muscle cuts will last a year and ground beef three months, but if the meat is properly packaged and stays completely frozen, it can last for years without much noticeable loss in quality.

If you’re worried about the quality of frozen beef compared to fresh, rest assured that there really isn’t any difference, providing that the meat is defrosted properly. At a recent taste test in Seattle, a group of esteemed chefs tasted two tenderloins from the same farm, one frozen and one fresh, and both cooked identically. They couldn’t tell the difference.

Defrosting should be done in the refrigerator and never at room temperature. If you’re in a rush, put the packaged meat in the sink under cool running water for about 20 minutes. Never use the microwave.

I’m Ready To Buy. Now What?

Once you’ve decided you have the space, money and time to deal with a bulk purchase, you have to locate a farmer or butcher who will sell it to you. You can find local producers at your neighborhood farmers market, or by checking out our source guide.

Bernett suggests sampling the ranch or butcher’s product before you make a sizable commitment. Arizona Grass Raised Beef is available at local Natural Grocers stores; other local ranches offer their products at the farmers’ market or online. Many producers are also happy to show their operations to visitors, which gives you the opportunity to build a relationship and get to know more about their production practices. If you’re interested in making a day trip, be sure to schedule it in advance and be respectful of the rancher’s time.

Now that you have a freezer full of healthy, high-quality meats, it’s time to fire up the grill.

Chuck is the front shoulder of the animal, and it’s a complicated mass of muscles, some of which are tender, but many of which aren’t. Still, the chuck is full of beefy flavor and includes some nice b...
Article from Edible Phoenix at https://ediblephoenix.ediblecommunities.com/shop/buying-beef-bulk